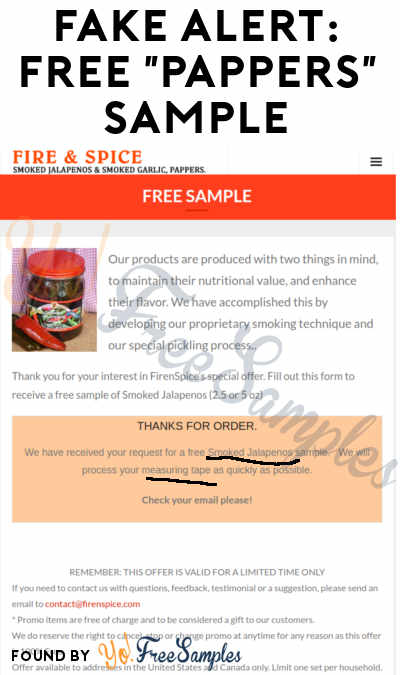 Update: This “Smokin’ Dave’s” or formerly “Fire & Spice” website offering samples is part of a “WebSEO” fake freebie network powered by another freebie site that has Russian ties. That means it is 100% fake as it is operated by freesamplesmail dot com, these samples do not come, only spammy emails arrive. More info here.

The second I saw this “Fire & Spice” sample offer this morning, I knew it was fake. It looked exactly like other fakes recently. While for the most part these are harmless, but you never know what people will do with your information so I’m calling this out as a fake sooner than later.

I think you can safely say this is fake. Avoid it. If you signed up for this one, worst case is you’ll get some spam mail, spam email and perhaps some sketchy links from fake PayPal/Amazon/other websites. Don’t trust links that ask for your password or any personal information, ever. Thank you for reading my fake freebie rant.