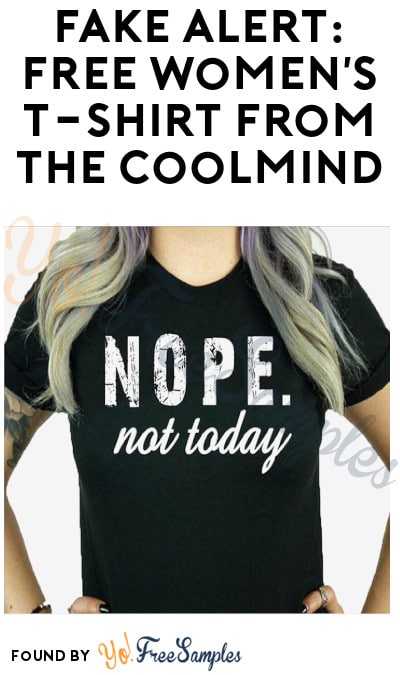 Freebie hunters, take note of a possible fake deal from The Coolmind offering free 100% Cotton Women’s T-Shirts. Unfortunately it looks like the Facebook page is old/unpopular, and the linked store is no longer working. I also came across the exact shirt image on AliExpress and a few other similar stores which is not a good sign. The best case scenario is that this is a merchant who tried to get rid of some inventory, but I wouldn’t count on this one arriving for anyone who signs up.

Here is the URL for reference but I strongly suggest not signing up: https://docs.google.com/forms/d/e/1FAIpQLSfBSzZxf0ZkO71rtoCiOcxlpAJ3s3SrkmosP_Pivn5CxwkmKw/viewform

Why I think this one is fake:

As usual with fake freebies, avoid them! If you see them on other websites, do not sign up. Signing up with these kinds of sites can mean you get spam mail, spam emails, sketchy links from fake PayPal/Amazon/other websites, and worst case scenario – can fall victim to identity theft. Don’t trust links that ask for your password or any personal information, ever. Thank you for reading my fake freebie rant. You can see other fake alerts or freebie updates here as well.

* Real freebies are great… Fake freebies just put you at risk of being phished or hacked, so avoid at all costs.

0 likes Mar 5, 2020 Free Samples Without Surveys By Mail, Important Free Stuff News Updates
The links this post may contain affiliate links which we earn a commision from. See the bottom of the site for full privacy, disclosure and terms & conditions policies.