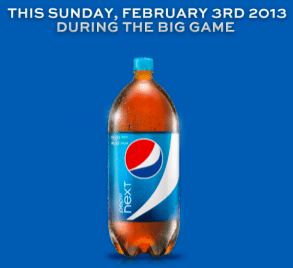 Rumor has it that during the first half of the game, Pepsi will be giving away a million coupons for a FREE two-liter bottle of Pepsi Next.

During the Super Bowl Game this Sunday, keep an eye out for this Pepsi Next commercial. Afterwards the coupon will be made available to the first million people who sign up at PepsiNext.com.

Also, this Coke commercial will be airing during the first half of the game. The first 50,000 people who log into their MyCokeRewards account (or registers) and cast a vote for which team they think will win can earn a coupon for a FREE 20-ounce bottle of Coke, Diet Coke or Coke Zero.