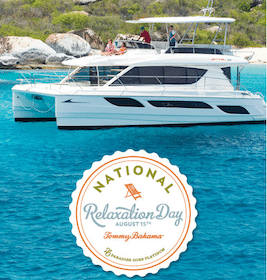 This year marks the 20th anniversary of Tommy Bahama. To celebrate, they are honoring National Relaxation Day and offering a chance to win the holiday of a lifetime. Clicl on the link below to enter for a chance to win a Grand Prize trip to the British Virgin Islands on a private yacht for you and three friends, plus other remarkable prizes. Contest is open trough 8/15.

ONE (1) GRAND PRIZE: A private cruise for four (4) on a MarineMax yacht in the
British Virgin Islands. Trip package includes round trip, coach-class air transportation for
four (4) from a major airport near winner’s home (determined by Sponsor in its sole
discretion) to the British Virgin Islands; seven (7) days, six (6) nights’ accommodations on a
MarineMax yacht (yacht determined by Sponsor in its sole discretion); ground
transportation to and from yacht; four (4) $1,000 Tommy Bahama Gift Cards; a Go Pro
Camera, and food and beverages while on the yacht.

0 likes Jul 22, 2013 Contests, Giveaways & Instant Win Sweepstakes, Free Samples Without Surveys By Mail
The links this post may contain affiliate links which we earn a commision from. See the bottom of the site for full privacy, disclosure and terms & conditions policies.