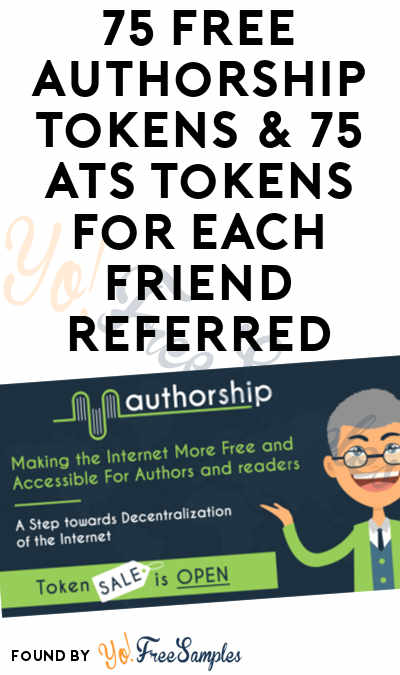 Update 9/16 16:00 EST: They decided to give out the tokens to people who earned them. Damage is done though, the trust has been broken. All this because they didn’t want to go through a few thousand entries after being flush with $4M in cash (uh, hello, solution!). Here is there email claiming they will pay everyone who earned it: I won’t be following through with many more updates, they are pretty much dead to me unless they make a huge dent against Amazon Kindle and start offering deals in their “marketplace” which would merit coverage from this website. They are off to a great start.

Update 9/16 11:00 EST: I can’t tell if Authorship.com’s team is a bunch of crooks or idiots. Less than 24 hours after the promotion ended I got an email with the following quote: “Users who didn’t receive their free ATS yet, I am sorry to inform you that all distributions have been suspended.” This was because they thought it wasn’t worth the effort to sort through thousands of entries that could be potentially fake entries. I found that to be an interesting move. They are screwing all these people over who could have contributed as book buyers to their market place. They raised $4M and they can’t hire a temp worker or 10 to help people who could be customers or at least promoters of their company because they had a sense of ownership? I can’t tell if Authorship.com’s team are idiots or crooks. Either way, this free promotion turned out to be a scam and a pretty dumb PR move when you consider the sheer amount of legitimate people they just screwed over who put forward little amounts of effort to help promote them. But hey, they raised over $4 million dollars so they win right? I don’t even want my coins, I just want people to know how badly they handled this scam of a promotion. It should be pretty telling how they will operate and deploy the capital they just raised in the future. If you are an investor and actually believe that they care about customers, they just screwed over 1,000’s of potential customers who could have had a sense of ownership with a low cost of free tokens. This has pump and dump scheme written all over it but that’s just an opinion among many.
-John ‘Samples’ Clark

Did you miss out on the Bitcoin and Ethereum cryptocurrency gold rush days when they were only a few cents? Well here is another shot to get a virtual currency for cheaper then a few cents: for free! Authorship is offering 75 Authorship tokens to help generate buzz for their platform and investors buying into it. They are currently worth about $0.15 per token by my rough math estimates, or roughly $11.25 for 75 of them. And they could go up 500-1000% or more if the platform is successful.

Authorship aims to become a decentralized publishing platform for authors, publishers, readers and translators to interact doing what they do (read, publish books, etc) while getting their fair share without middlemen like Amazon or large scary publishing companies taking more than needed. And the main currency you’ll need is, ATS (Authorship Tokens) which is how folks will buy and sell products and related services on the platform. The company is also backed by a team with experience in book promotion and publishing. If you are a fan of the movement or simply want to get your tokens sign on up by following the instructions below.

How to get 75 free ATS tokens:

0 likes Aug 22, 2017 Books, Free Samples Without Surveys By Mail
The links this post may contain affiliate links which we earn a commision from. See the bottom of the site for full privacy, disclosure and terms & conditions policies.